Showing posts with label Bobbi Brown. Show all posts
Showing posts with label Bobbi Brown. Show all posts
Oh January, January, January. I've tried. Believe me, I've tried- but I've more or less resigned myself to the fact that you and I are never going to be the best of friends. Battling through the post birthday/post Christmas and back to doing something other than sitting in front of the telly drinking tea and ploughing my way through a selection box blues has proved harder than usual this year, and, without wanting to wish my life away, can it be spring already??! There's just something about this time of the year which makes me do an internal 'ugh' every time I think about it (I'm sure I'm not the only one...), but in an attempt to cast a more optimistic light on things, I've been immersed in making plans and looking forward to brighter days (typically, however, as I type this, it's gloriously sunny outside..!) As well as injecting a burst of new season chic into my wardrobe with a couple of carefully curated purchases like those which I posted about last week, I've also been enjoying getting to grips with some new additions to my makeup bag- and one of my current go to favourties comes from none other than Bobbi Brown:
If you're a regular around these parts, then you'll be well aware of the fact that I'm a Bobbi Brown fan girl. My day to day routine has been transformed since discovering their Creamy Concealer and Touch Up Stick, and just before my birthday last month, I popped into their newly opened, beautifully designed standalone store in Covent Garden- with the sole purpose of doing some lunchtime window shopping. However, not fifteen minutes later, I was making my way out of the store with this Mini Eye Palette in my grasp, and I've been using it fairly religiously ever since. It's essentially an octuplet of individual eye shadows, each of which can be used in various combinations or as simple standalone washes. With some neutral browns, pretty pinks and cooler grey hues, it's the perfect collection of subtle everyday colours, with a splash of sparkle thrown in if you're feeling bold. Not only that, but it's wonderfully compact- so would be ideal for packing in your carry on if you're heading away for a winter escape, and for the sheer handy factor alone, it's indispensable to me if I'm in a rush of a morning (which, let's be honest, is most of the time...!)
Have you picked up any new beauty buys to perk up your January?
(Image credit: Sarah Farrell, please do not reproduce without permission.) 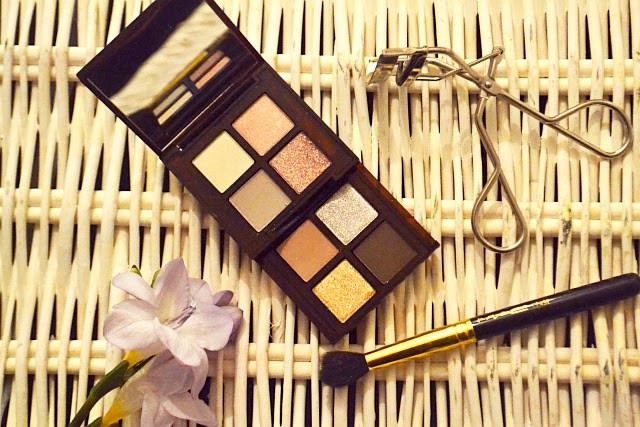 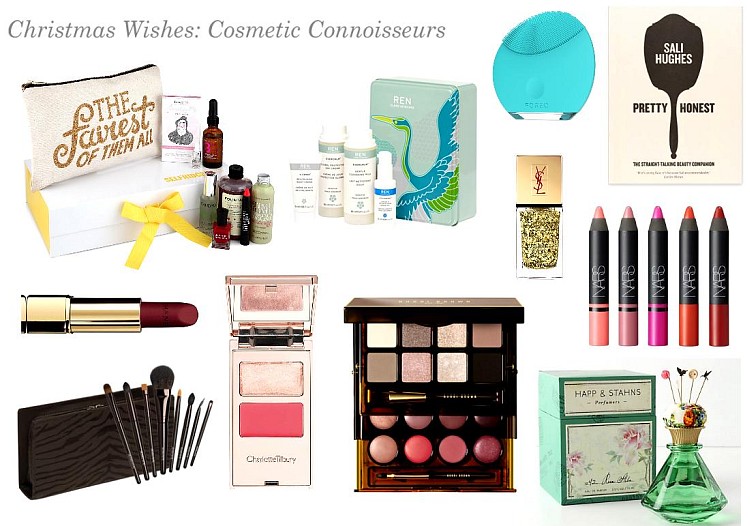 By Os-Ads 12/06/2014
At the start of the month, I made my first trip to Cambridge for my lovely friend Katy's wedding. As well as making the cake, I pitched in to help with the flowers and setting up the venue, which was all good fun- and I really loved being in the middle of the countryside too as it made a very welcome change from the hustle and bustle of London town. To my shame, I'm not particularly well travelled within the UK- apart from the odd trip to Northern Ireland and Wales to see family when I was younger and my jaunt to Edinburgh last October, I've not really seen a great deal of what brilliant Britain has to offer, so the opportunity to broaden my horizons a little bit more was a very welcome one. After my Moroccan adventure at the start of the year, I've become something of a master at minimalistic packing- although this time around the contents of my suitcase were slightly more tailored to a special occasion. For beachy breaks I never really tend to bring a great deal of make up with me, but this was an event which demanded a few more products than my usual basic tinted moisuriser and mascara combination. So, whether you're heading off to a late summer wedding or are planning a weekend away, here's a little peek inside my mini break make up bag: 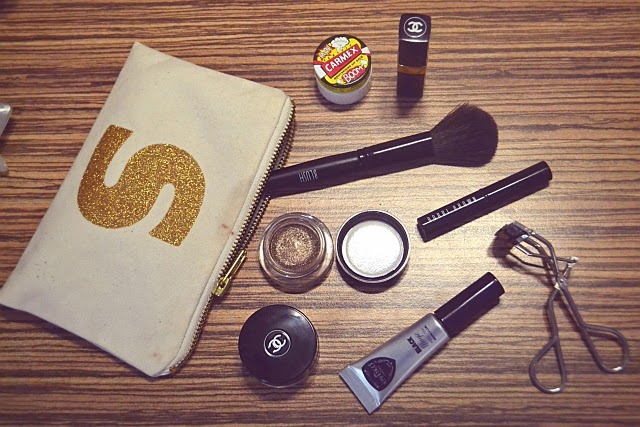 Anyone who has known me for a long time will happily tell you that when it comes to make up, I'm a firm believer in the less is more manifesto. As well as being a bit of a lazy Lucy, when I look in the mirror before leaving the house, I still like to look like me- and can think of nothing worse than having to worry about retouching eyeliner, lipstick and blusher as the day goes on. Ain't nobody got time fo' that.

Low maintenance products which can stand up to the task of staying fixed on my face are definitely my go to favourites, and for my first foray into wedding attendance, I fixed on something which I knew could stand up to laughing, crying and eating endless portions of cake. So, after prepping my face with my Laura Mercier Tinted Moisturiser and hiding my dark circles with a generous helping of Bobbi Brown's Creamy Concealer, I reached for some day to day essentials in the shape of my Carmex Lip Balm and Shu Uemura Eyelash Curlers (perhaps the best £20 I have ever spent!) and Bobbi Brown's Face Touch Up Stick. After a little helping of NARS blusher, I tackled an occasion eye with the help of Chanel's Illusion D'Ombre Shadow, blending Initiation and Convoitise for a little bit of subtle sparkle. Accentuating my eyes with Eyeko's Black Magic Mascara (not the best I've ever used, but by no means the worst either!), I finished things off with another Chanel staple- their Rouge Coco Shine Lipstick in Boy- the perfect smudge-proof, subtle pink with a splash of romance which seemed to be perfect for the big day.

What are your travel make up staples?

(Image credit: Sarah Farrell, please do not reproduce without permission.)

By Os-Ads 9/02/2014
As I've hinted a few times before, I'm really no expert when it comes to all things beauty based, but over the last year or so, I've definitely been paying a lot more attention to my day to day routine, particularly when it comes to skincare. I've always had problem skin, which tends to err on the oily side and throughout my teenage years I suffered quite badly with spots, some of which have left me with a few scars here and there. Fast forward ten years or so, and I'm still prone to the odd breakout (my chin in particular seems to bear the brunt!), but with a relatively fuss free approach to cleansing (thank heaven for the Clarisonic!) and some clean eating, my skin has definitely settled down. Having said that, since discovering the Laura Mercier Tinted Moisturiser about a year or so ago, I've definitely recognised the value of having a well stocked makeup bag, and have recently added to my anti-blemish arsenal with a few hero products from Bobbi Brown: 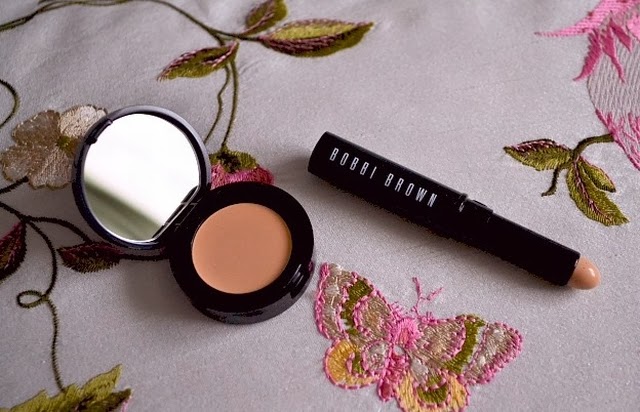 Bobbi Brown Creamy Concealer in Porcelain & Bobbi Brown Touch Up Stick in Porcelain, both via John Lewis.
Throughout my teenage years, I was a loyal fan of Rimmel's concealer stick, but after they changed the formulation I struggled to find a shade which was the right match for my skin tone (i.e pale as a ghost!). I then progressed on to Vichy's Dermablend, which I still really love but which isn't really long wearing enough for long days at work and the temperature challenges presented by London transport! So, a few weekends ago I opted to invest in some Bobbi Brown products, primarily as I'd heard such good things about them from friends and read countless glowing reviews online. First up, the Touch Up Stick, which is ideal for adding an extra layer of coverage to the areas of my face which are more blemish prone than usual. The formulation of this is pretty much perfect- it's really light but still offers plenty of camouflage, and is a dream at disguising some of angrier breakouts which I get. Worth noting too that this shade (Porcelain) is pretty much a perfect colour match for my Tinted Moisturiser, so no problems with switching between brands here- thank goodness!
The Creamy Concealer is perhaps one of Bobbi Brown's best known and best-selling products, and I picked this up in an attempt to add a little bit more balance to my complexion, and to try and mask the hereditary dark circles which seem to have taken up residence under my eyes! Again, this is perfect- all it requires is a few gentle dabs to build up a light layer of coverage, and is obviously something which you can use more or less of depending on how tired you a) look and b) feel. Definitely a dream duo which I'm sure I'll be repurchasing again!
Are you a fan of Bobbi Brown products? Have you tried the Creamy Concealer or the Touch Up Stick?
(Image credit: Sarah Farrell, please do not reproduce without permission.)